We thought hearing what others had to say about us summed things up pretty nicely.

So here are a few kind words from our friends in the community: 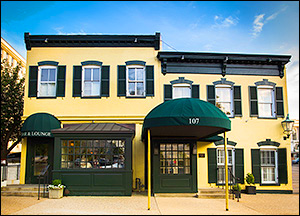 How to find us:

What Patrons Are Saying:

★★★★★ "The restaurant was a great pick for the evening. The staff are courteous, know the menu and very helpful. The bartender made a delicious Old Fashion. The food was the best. I can’t wait to be back in the District to visit again."
- Steve (VIP), NY; OpenTable, 1/31/2022

★★★★★ "The Monocle is always top notch in every category. Highly recommend. The hosts/owners treat you like family."
- MildredWHolmes (VIP), DC; OpenTable, 1/25/2022

★★★★★ "Waiting to try this restaurant for quite some time, used Restaurant week for an excuse to go! Welcoming, delicious, well priced, cozy, full of history. Loved it, look forward to next time."
- Arealgem24k (VIP), DC; OpenTable, 1/22/2022

★★★★★ "Incredible meal, service, ambience. It was one of the best dining experiences we’ve ever had. Highly recommend. Server was top notch. Everything on the menu was delicious."
- JoanF, Seattle; OpenTable, 1/22/2022

For reservations go to:
OpenTable.com

FROM: THE HILL Newspaper

Connie Valanos and his wife, Helen, opened The Monocle on Capitol Hill in October 1960, just as two young senators who were friends and regular customers, John F. Kennedy and Richard Nixon, were battling it out for the presidency.

The Greek-American couple operated The Monocle until 1989 when their son, John, and his wife, Vasiliki, took over the restaurant. He estimates that half the people who have served in Congress since then have eaten — or drunk — there.

The Monocle is just a stone’s throw from the rear entrances to the Hart and Dirksen Senate Office buildings on D St. N.E. and turns its back on the Capitol.

But it certainly doesn’t turn its back on new and old customers, many of whose photos line the walls, including every president since Kennedy, although not all were in the White House at the time. (Not all ex-presidents are as popular as JFK; Valanos once found Nixon’s photo in the Ladies Room, taken out of its frame and ripped to shreds.)

He noted that Maître d’ Nick Selimos, a native of Greece, has been greeting customers for 27 years. “He’s terrific with names. He makes people feel comfortable. And our waiters give people attention right away. The worst thing that can happen is if you have to wait 15 minutes for someone to notice you’re there.”

Valanos added, “ There’s nothing more satisfying than to have someone after eating here say, ‘You have a great restaurant. We enjoyed the food and the service and we’ll tell other people about it, and we’ll come back ourselves.’”

Valanos, 45, estimates that three quarters of his customers “are people coming to the Hill to do business or to show friends or family what Washington is all about. They stop to see the photos on the wall, to experience some of the history that makes us unique. They say this is where JFK dined, where Mark Russell taped his CNN shows. You can just see a lot of excitement in their eyes.”

The Monocle doesn’t have a star chef, but rather “a team of very good chefs,” according to Valanos. “Most of them have worked here for a long time and have very good techniques. They will test certain specials, and if they sell well, we put it on the menu.”

One such special features plump Chesapeake Bay oysters, baked in a light curry sauce with a little chardonnay.

But the old standbys like crab cakes, porterhouse steaks and soft shell crabs, and desserts like blackberry crumble with ice cream never go out of favor.

Almost any week night, you can find a private dinner or political fundraiser in one of the two second floor dining rooms. One of those private dinners will be held this week when all 13 woman senators gather for their quarterly dinner. “That’s what drives business,” said Valanos. “We’re usually booked six weeks out when Congress is in session.”

A Restaurant Review from Washingtonian Magazine

The Valonos family has played host to senators and staff at the Monocle, the restaurant closest to the Senate side of the Capitol, for 40 years. No matter which party controls Congress, the Monocle’s upstairs rooms are a favorite place for congressional fundraisers, and the restaurant has become the venue for caucuses by the Senate’s women members. Staffers still call the Monocle to warn the restaurant that an important vote is coming up. The restaurant’s enduring popularity is a tribute to the hospitality of a remarkable family.
Senate connection aside, the Monocle is a better restaurant than it’s given credit for. The crabcakes are probably the Monocle’s signature dish, in sandwich form or as a platter. Pan-fried, deep-fried, or broiled, they’re well cooked, with plenty of lumps of sweet crab. The menu offers everything from burgers to steaks to fish, all top-quality ingredients cooked well. A recent offering on the dinner menu has been a whole roasted Maine lobster with Sauternes-butter sauce, a sweet, rich complement to the delicate sweetness of the crustacean.

Since 1960, this old smoothie has been counseling decision-makers both Democrat and Republican in the wisdom of the saying, “An empty stomach is not a good political advisor.” The Congressional Record may not show it, but intentions are spoken here, alliances formed, and deals sealed.

Just a stone’s throw from the Capitol, the Monocle might connect to it by secret tunnel, with a golf-cart shuttle to move the belly politic from work to dine and back.

“There’s no tunnel,” says owner John Valanos.
But he acknowledges that when Congress is in session, the maitre d’ might field 15 calls in a row for patrons. Two upstairs rooms, or the whole restaurant on weekends, are frequently reserved for private parties, strategy meetings, and fundraisers. During the week, however, no visitor pass is required. In this unpretentious setting, tourists in sneakers are as comfortable as lawyers in pinstripes. There are no surprises here.

Reliable, risk averse, genteel, the Monocle’s menu is dominated by seafoods and meats. The New York strip, specially butchered for thickness, is served in a red wine sauce. Many patrons swear it embarrasses steaks at Washington’s more expensive houses. On a recent visit, the crab imperial, a succulent baked cake of pure crab, embarrassed us for how quickly we devoured it. The paradise salad, romaine greens generously mixed with crunchy hearts of palm in a light dressing, was finished fast, too. And it all began with an appetizer of Virginia smoked trout transporting us to an earlier age in America when simple delicacies like this were slow-cooked in clapboard houses.

The Valanos family has owned the Monocle since it opened and it has changed little in that time. It remains half pub, half restaurant. The pub part, thick with cigar smoke, seats drinkers at sticky tables. The bar area is modest and resembles a wet bar at an Ivy-league fraternity. Men in white shirts and loosened ties, their jackets slung over an arm or nearby chair, talk shop. At a table, two pretty young women — perhaps interns — eye the scene and are eyed right back.

The restaurant half, just out of smoke range, is an open area ideal for seating large or small groups and for eavesdropping. Washington words of wisdom are stenciled around the cornices and beams: “If you can’t feel things you can’t see or hear, you don’t belong here.” “If you want a friend in Washington — get a dog.” And the aforementioned quote about an empty stomach. The walls boast 40 years of autographed 8-by-10s; from the legends of the 1960s, like Bobby Kennedy and Everett Dirksen, to a near quorum of current senators and representatives.

When famous faces are expected, Valanos admits he will rearrange the photos to display those faces more prominently, or to allow guests to sit under Kennedy’s or George Bush’s portrait as requested. People are touchy about the photos, says Valanos. If he retires them before their time, people notice. Vigilante patrons have also retired photos themselves. One night, Valanos found Richard Nixon in the ladies’ room — his photo, rather. It was broken out of its frame and ripped to shreds.